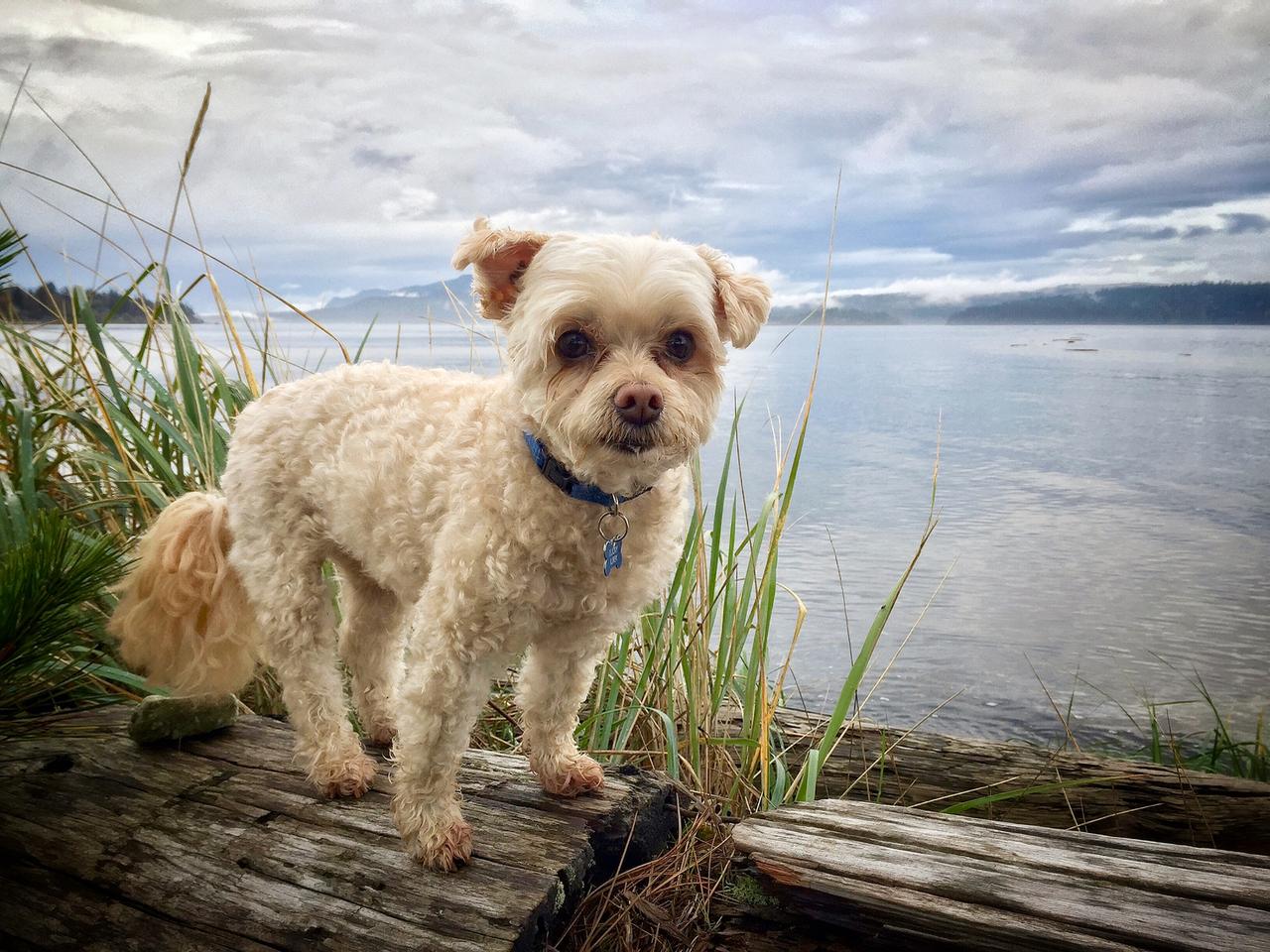 What’s wrong with being Lucky

If you’ve been to our office, at some point you may have had the fortune to meet the most important member of our family and our family business: Lucky.

A Maltese-poodle, Lucky is the official greeter and security guard of Campbell River Hearing Clinic. (Okay, that last title is really just honorary; he only weighs 8 pounds,) A great little dog, Lucky has a wonderful personality and loves going for walks or sitting with Jana and me – especially when we’re eating chicken or steak. He’s also very smart, as is proven by the fact that he’s bilingual, understanding both Czech and English.

Like most dogs, Lucky knows plenty of important words – well, important to canines at least. Use the word “walk” by accident and you’ll have to deal with the consequences. Mention the word “cat,” and all hell could break loose. We even have to be careful not to say “coffee” in Czech because it’s very similar to the Czech word for “kitty.” Suffice it to say, mornings can be exciting around our house. Or at least they used to be.

Our Lucky is now 13 years old, which, according to experts, makes him about 68 in human years. While the years haven’t changed his sweet personality or attitude toward cats, there has been a change in his hearing.

Like many forms of hearing loss, it started gradually.  And even though we’re in the hearing business, it took us a while to catch on.

I’d let Lucky out early in the morning and try to call to him in a soft voice so as not to wake up the neighbours, but he wouldn’t respond. I’d get annoyed at him thinking he was ignoring me so he could carry on eating deer poop. His apparent disregard was becoming a common and frustrating habit, and at times I’d be forced to scold him.

But then I noticed that a cat would meow during one of our walks, and what would once provoke a frenzy would be completely ignored. Fireworks and thunder resulted in little to no reaction – no more running to his ‘refuge’ behind the toilet. And eventually we realized that we could say whatever we wanted in front of him and there’d be no response.

Finally, we clued in – Lucky was suffering from presbycusis, the most common type of age-induced hearing loss.

How hearing loss has changed our Lucky

Since we became aware of Lucky’s hearing, other changes we observed now made sense. Most conspicuously, he’s started to become anxious and frustrated, and, frankly, a bit of an annoyance to us at times.

Lucky is constantly underfoot and follows us everywhere because he doesn’t want to miss us leaving the house. He’ll be crying in another room and we’ll have to get up and go get him because he can’t hear us calling him to let him know where we are. And he’s more tired, as he sleeps less to ensure he doesn’t miss out on us leaving a room or the house.

When we talk to him he faces us and watches intently; you can tell he understands by the tempo of his tail wags. We, of course, must speak more loudly and clearly to ensure he catches those “special” words.

Even at the office, Lucky sometimes loses out on greeting his favourite clients (even those who bring him treats) because he doesn’t hear the door beeper from his spot under Jana’s desk. At home, he can't hear us coming so we often startle him inadvertently.

It’s sad because we know he’s missing out on things. And we feel bad about getting annoyed by him. After all, it’s not his fault.

But he’s a plucky little guy and is learning to adapt to his situation. For instance, he now knows to watch our new smart lock when he’s expecting one of us to come home. His normal routine had been to stay in bed until we went to have breakfast, at which point he’d move to the living room. Now he moves to a strategic spot in the house where he can see both Jana and me, and that’s where he plunks himself down.

We’re all making changes to account for his hearing loss because, really, what other options do we have? 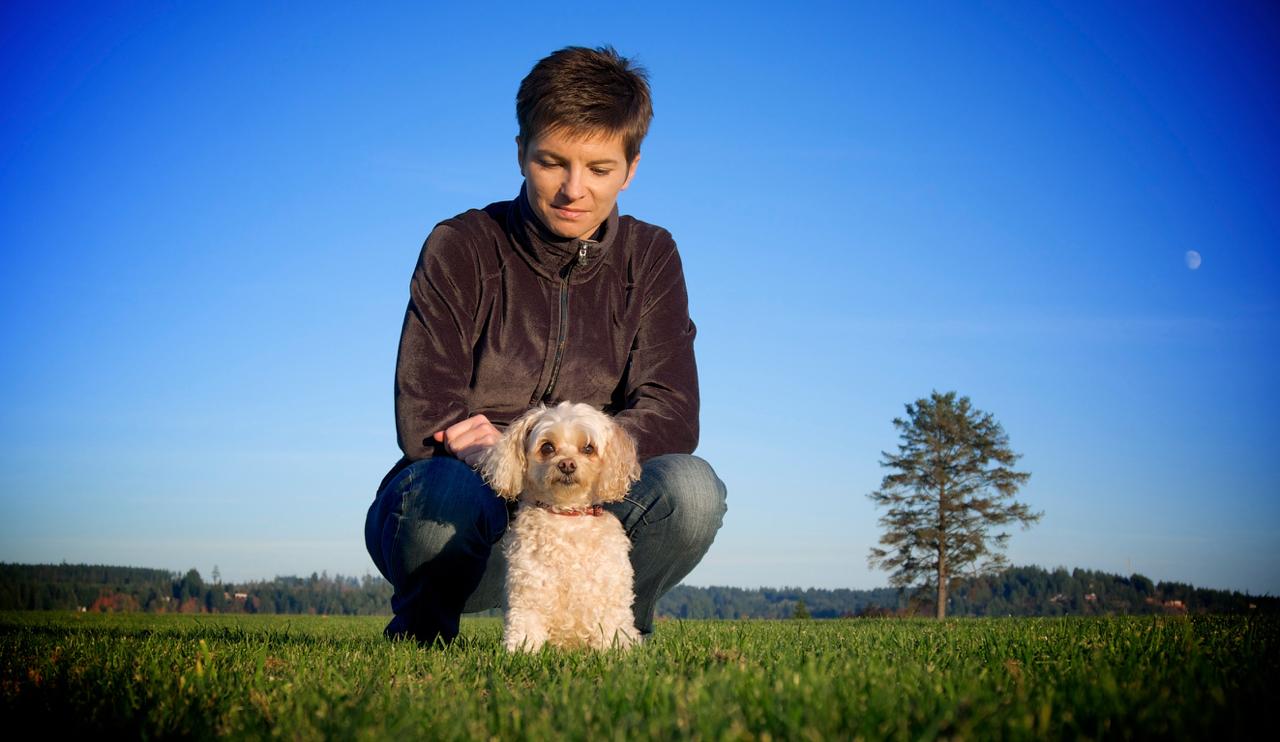 What are you missing (and who are you annoying)?

Do you ever feel frustrated by others because of their mumbling? Or maybe others are getting annoyed at you? As with Lucky, maybe your hearing loss started gradually. Maybe you don’t even realize you have hearing loss. Lucky can no longer hear the siren call of a stray cat. What are you missing out on?

Do the springtime songbirds sound as distinct? Do rainstorms seem like they don’t patter quite as hard on your rooftop as they once did? What about the waves that lap our coastal shores – do they still send chills or melt your worries away?

Do you find that you’re turning up the television more often? Perhaps you avoid being in crowded rooms or going out to large gatherings where understanding people is difficult? Does your partner complain that you’re ignoring or missing out on parts of conversations?

Take a moment and consider how your behaviours or relationships have changed in recent years. You see, even people with mild hearing loss need to exert a lot of extra effort to understand conversations. This often causes those same people to become exhausted and annoyed for no apparent reason.

Even worse is the way hearing loss can annoy the people around you, especially the ones who constantly have to repeat themselves for your benefit. Typically, you won't even realize you're doing it until someone points it out – then you realize everyone knew about your condition but you.

If you think changes in hearing may be causing you or a loved one to miss out on the great things that make life fuller and richer, I encourage you to find out more about recognizing and dealing with changes in your hearing sensitivity.

We’re always happy to give you a complimentary hearing assessment and answer any questions you might have at our office. Just call 250.914.3200 or visit us at 780-D 13th Avenue in Campbell River or at #21 – 1705 Campbell Way in Port McNeill.

And, of course, visit the Hearing Solutions, where you’ll find lots of useful resources about hearing loss.

I can’t promise that we can help your dog hear better, but we’d love to help you rediscover the full beauty and aural intricacies of this wonderful world around us.

A hearing test is an easy and painless way to find out how your ears are working. We'll even give you a cookie at the end.